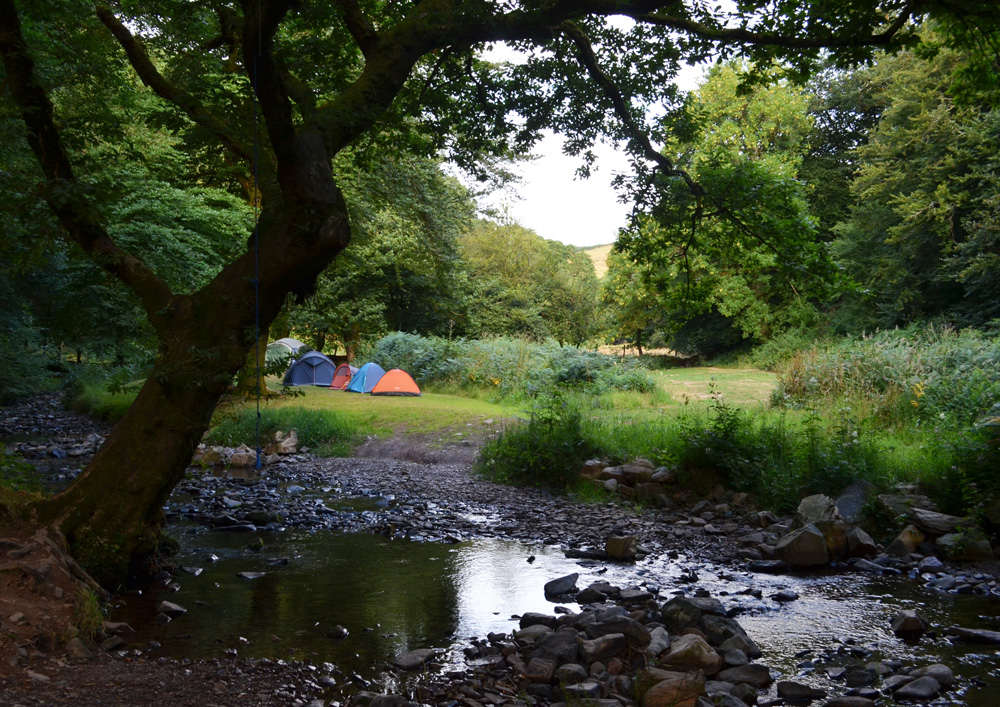 Early Saturday morning, in the midst of the long, hot summer heatwave.  A rare day off together, we pondered how to make the most of the day.

We’d made vague plans to go camping since May, but the tiredness of our seasonal jobs had always got the better of us.

I was working the next day, but not until 12 – could we squeeze a quick trip in? After discounting Dartmoor due to time constraints, I grabbed my trusty Wild Guide and found a campsite in the woods on Exmoor National Park, only an hour from home.

Sceptical that there would be space on the first weekend of the summer holidays, B made the call and surprisingly we managed to book a spot for the night.

We jumped out of bed, threw our gear in the car and hit the road by 10.

Turning off the main A road from Barnstaple, the roads began to narrow and wind, before leading us out to the wide-open moorlands of the national park, tinged with yellow from this year’s long, hot summer days.

Dark clouds gathered high in the sky at one point, but failed to trouble us and instead created a striking background when we pulled up alongside stray Highland cattle.

We weaved our way through tiny Simonsbath and on to Exford, with ivy-clad pubs and antique shops before climbing back up the wide open moors. We only passed a handful of cars on the way, incredible for a Saturday in the school holidays. The moors soon gave way to a sea view and we jumped out for a walk amongst the bracken to admire the views down to Porlock.

Ready for our picnic, we hopped back in the car down to Porlock, which was a little busy so we continued on the small harbour of Porlock Weir. Unpacking the picnic, we realised in our haste that we’d forgotten to pack any cutlery, so our pasta was eaten with a wooden spoon and spatula!

We wandered along the weir which is lined by little cafe’s serving crab sandwiches and the local oysters, along with craft shops selling ceramics and handmade wooden souvenirs, before scrambling over the pebble beach and down to the shoreline which was covered in scores of dead moon jellyfish (which B thought would be hilarious to try and throw at me!).

Refuelled, it was time to seek out the campsite. 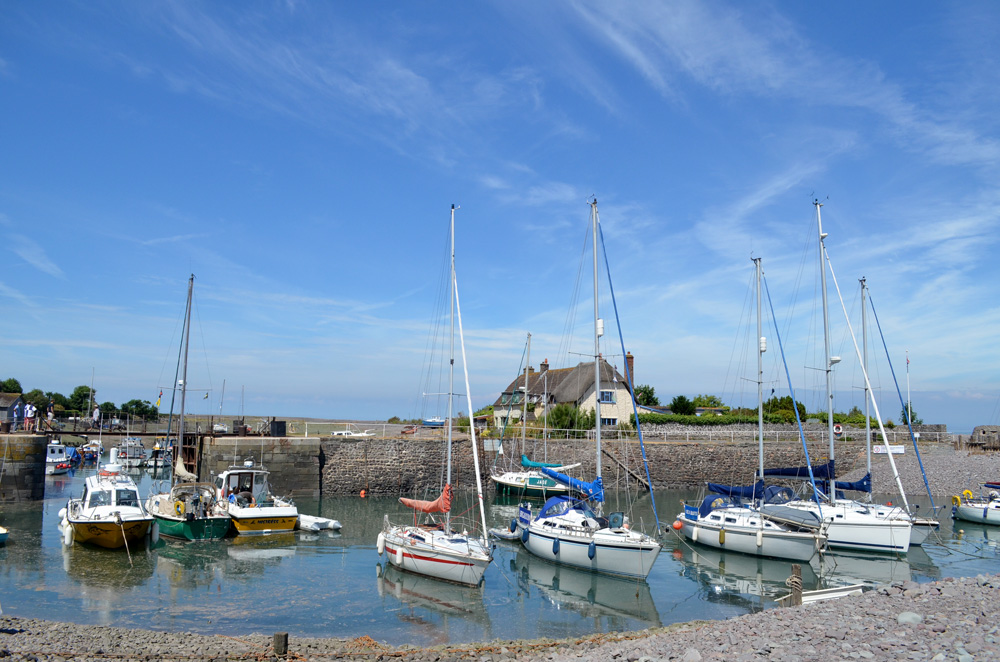 Directions to the campsite led us back up the steep hill behind Porlock, before dipping down to the small, wooded valley of Horner Wood, owned by the National Trust. Opposite the wood, a farm gate directed us into the campsite, which follows the path of a shallow river, shaded by the withering trees.

It took B just 3 minutes to pitch his new 2 man tent and after slightly melting as we pulled all our gear out of the car in the searing afternoon sun, we sat on the wooden bridge which divided up the fields in the campsite and dipped our toes into the dreamy, icy water.

In the neighbouring field, a group of excitable kids splashed along in the river with little fishing nets, whilst groups of families were creating their own mini-camp circles complete with bunting and a campfire.

There was that happy, schools out excitement in the air, and I felt nostalgia for that feeling of the long six weeks stretching out in front of you with holidays and friends on the horizon.

Driving the coast road to the Valley of the Rocks

Home for the night made, we drove back to Porlock and down the incredibly steep coast road towards Lynmouth (think escape lanes kind of steep), the sun-parched moors of the national park to our left, the Bristol Channel stretching out towards Wales to our right.

A mile or so outside of Lynmouth we found the Valley of the Rocks, a towering, spectacular rock formation, just off the South West Coast Path.

After refuelling with a quick cream tea at pretty Mother Meldrums Tea Garden, B set off on an enthusiastic loop around the neighbouring hills and I followed a small section of the easy, flat coast path with feral goats grazing on the steep banks.

On my way back, I climbed up the Castle Rock and met B, dripping with sweat but grinning after his crazy challenge.

Riding from Lynmouth to Lynton on the clifftop funicular railway

Arriving back into Lynmouth around 6, we noticed that the famous railway was still open. The clifftop funicular railway which connects the hilltop villages of Lynton and Lynmouth was opened in 1890, is grade 2 listed and is one of only 3 fully watered powered railways left in the world.

As the driver explained the engineering behind the water power to B, I watched the sea views open out in front of me on the 5-minute trundle up the steep hill.

We took a short wander around Lynton, peering in the closed art galleries and finding some impressive street art whilst making a note to come back to a brightly coloured cafe called Charlie Friday which had a cute ‘wishing tree’ outside its doors.

We stopped for chip shop chips in Lynmouth to fill a hole in our rumbling bellies, driving back up the steep hill for a view back down to Lynmouth as we dived into the salty treat.

Back at the campsite, we decided to just use our gas burner to make our hot dogs instead of building a campfire as we knew we’d probably both be asleep by 10ish (rock and roll!)

And we were, despite the other campers staying up with bottles of wine, we fell into a peaceful sleep amongst the trees.

An early morning walk and mindfulness exercise in Horner Wood

I woke up to the soft babble of river somewhere after six.

I lay there for a while staring up at the growing light amongst the trees. As B stirred, we climbed our way out the tent, threw on our boots and took the path opposite the campsite into Horner Wood.

A rough, muddy path followed the river, deep into the ancient wood, and we are thankful of the cool morning light after the searing summer days.

We paused on a rock next to the river and I talk to B about a little exercise I do to be mindful in a new place using the senses.

It’s so easy just to see a new place from behind our phone or camera screens, to walk on by.

But engaging the senses pulls you into the moment – being aware of what you can see, hear, smell and feel. For me, places like this are where I feel most connected.

That connection stays with me as I pad around barefoot packing the car back up and eating a porridge pot with the wooden spoon, wishing I didn’t have to go back to work this afternoon.

And the connection remains, until we turn back off Exmoor’s windy roads, back onto the busy main road toward Barnstaple, full of noise and fastness.

But whenever I need a moment of calm, I can draw myself back to our little haven in the Exmoor woods, safe that the next microadventure will be just around the corner.

Check out my past microadventures

Pool Bridge Campsite, Horner Wood is 2 miles from Porlock. For bookings 01643 86252. Check it out on Cool Camping.

The Lynmouth to Lynton Funicular Cliff Railway is open until 8 pm during the summer holidays. An adult return fare is £3.90 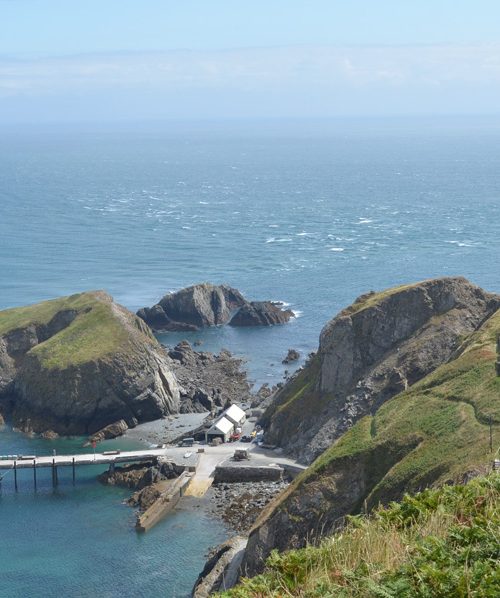 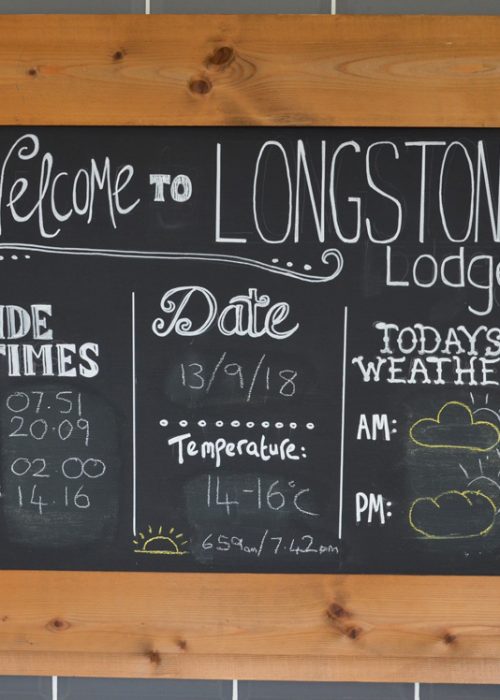 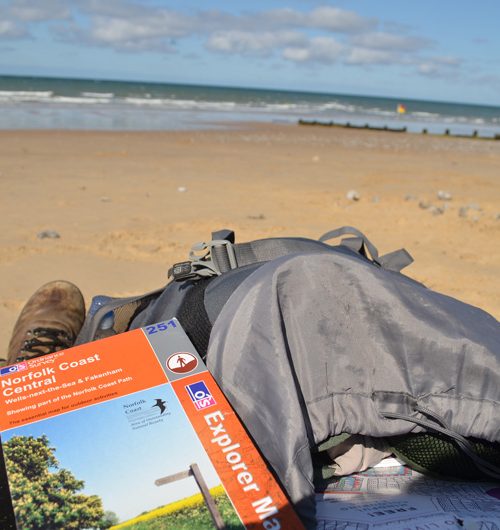