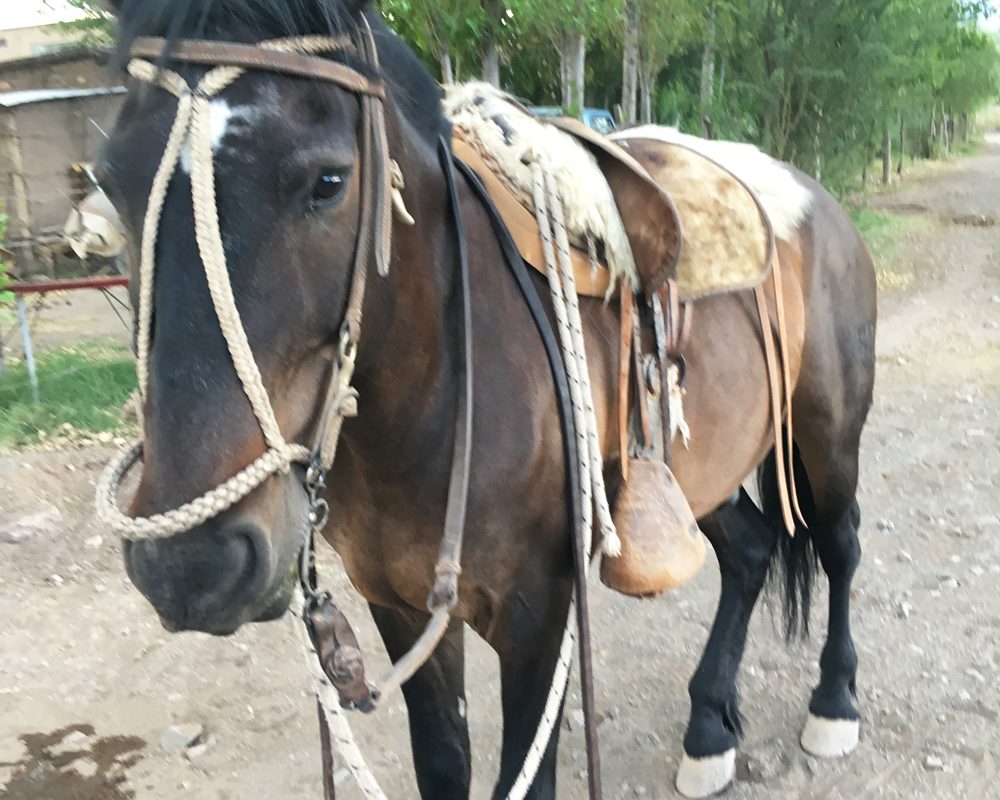 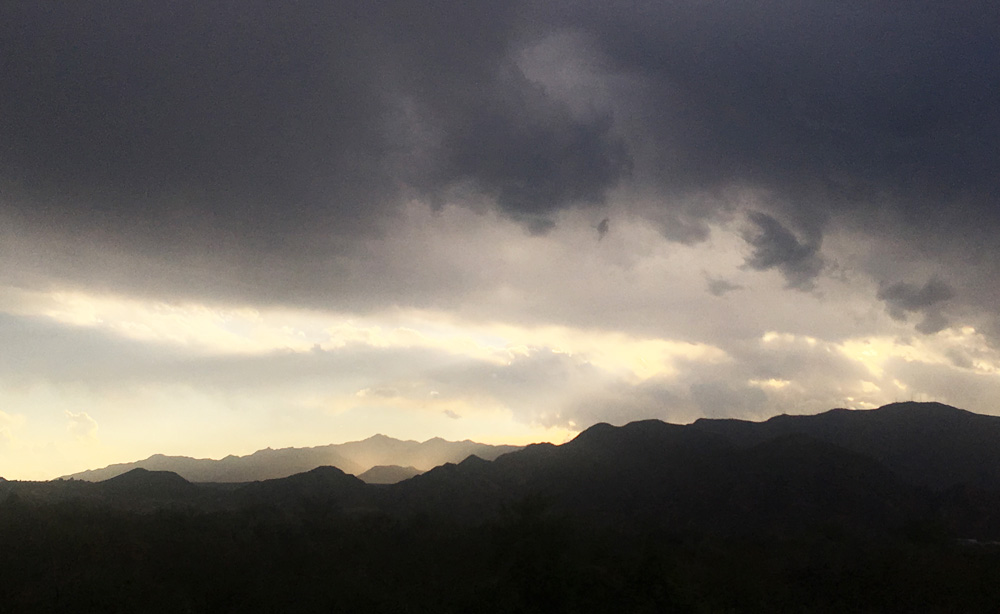 “To go left, pull the reins like this and to make him stop, pull the reins back sharply”. This was the one command I really cared about as I eyed my horse, Miguel, nervously.

After bumping down a gravel road for half an hour outside of Mendoza with B and two girls from our hostel, the road ended at an extended house complete with stables, a swimming pool and a cob oven.

The heat of the day was just starting to wane as we arrived at 4.30pm. We eyed the swimming pool hopefully, and thankfully we were given an hour to splash around to allow the clouds to disperse the remaining heat.

Mendoza only gets around 200mm of rain a year, so to see darkening clouds over the mountains was a rarity and a welcome relief.

Having dried off and laced up my hiking boots, we were shown over to the rough stables where 5 horses were being tacted up with simple saddles, layered with pieces of foam. Our guide, Alejandro, had a classic Argentine gaucho look about him – wide-brimmed hat, tight slacks and pointed boots.

I waited nervously next to a huge pile of carrots, watching as B climbed into the saddle before it was my turn for a leg up. I slide my boots into the soft leather teardrops, different from the familiar metal stirrups of riding in England. 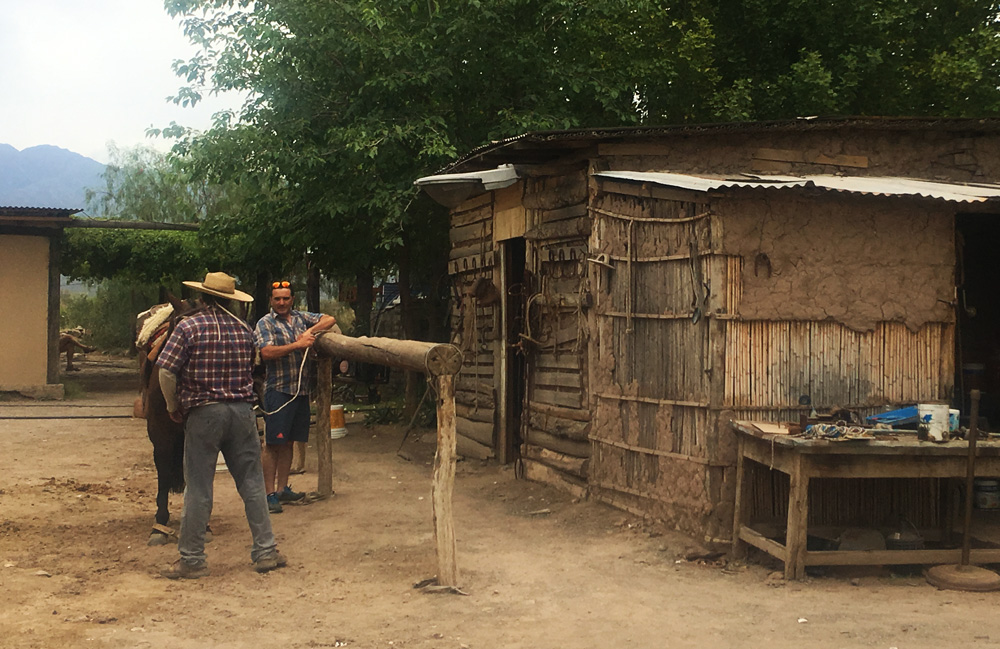 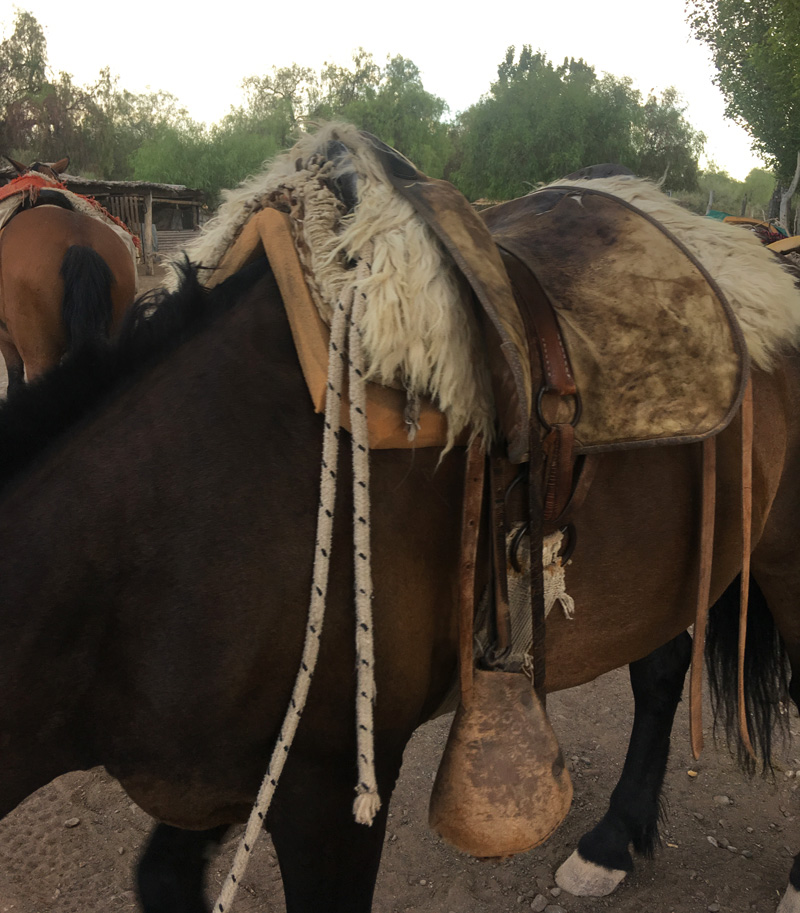 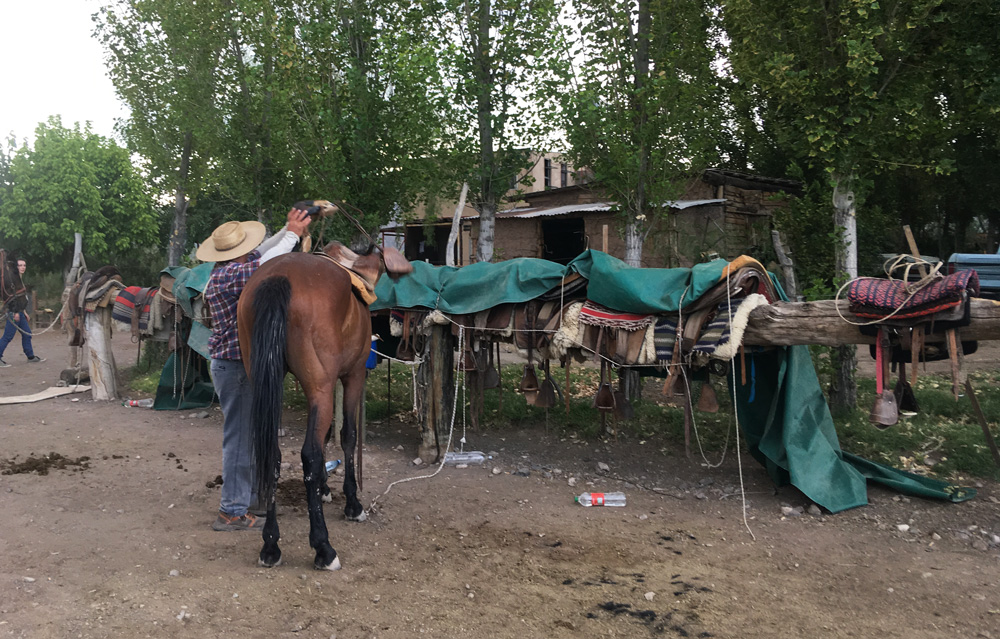 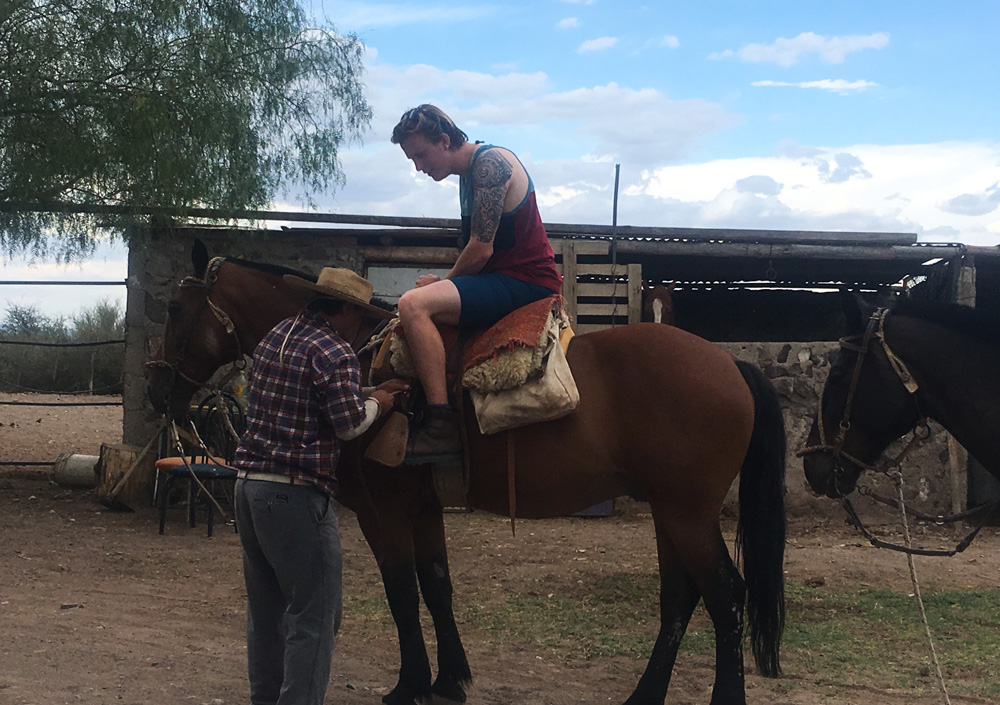 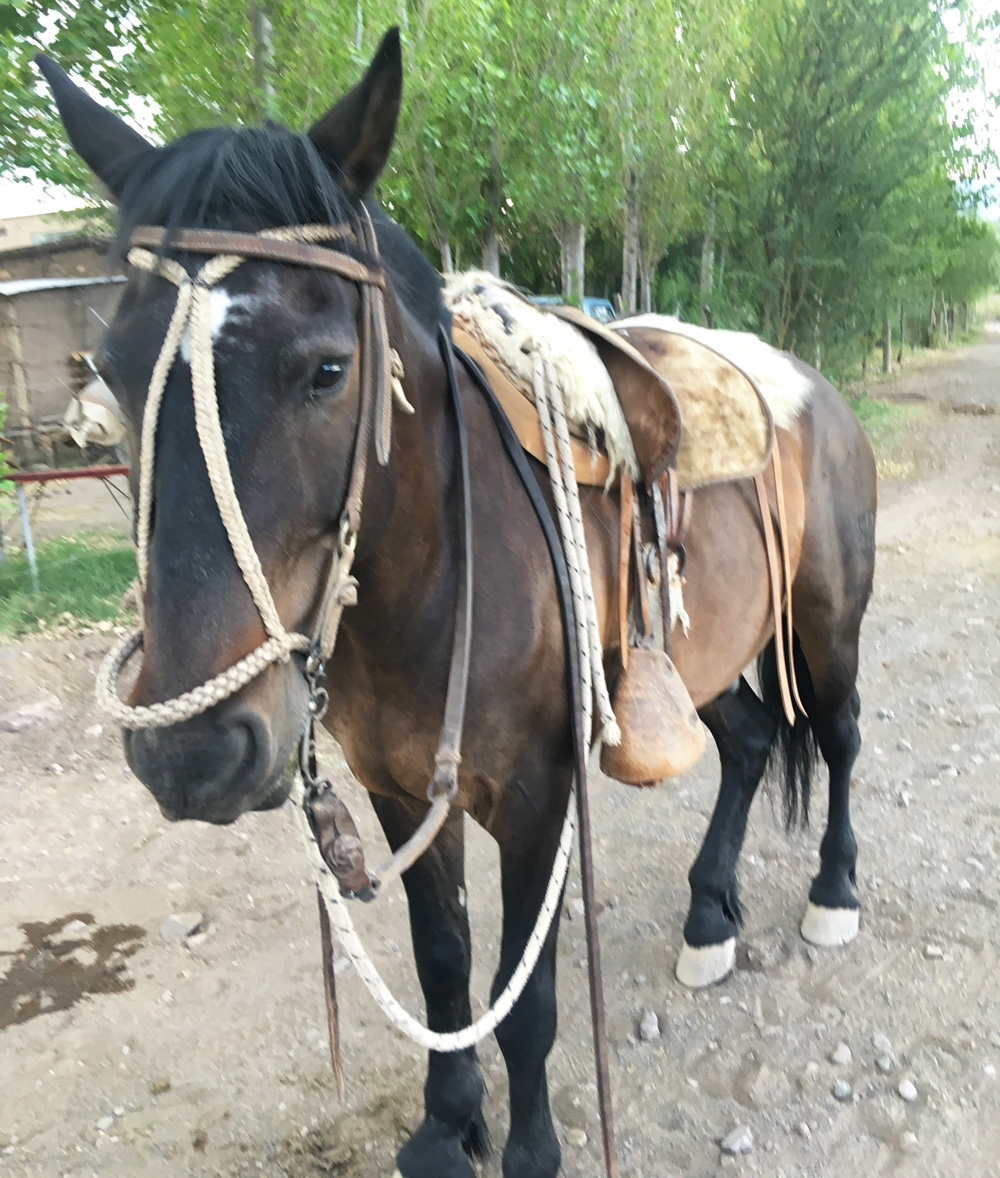 Once all 4 of us were ready, Alejandro led us to a gravel path out of the ranch and into the scrub bushland below the towering mountain range. He spoke no English, but one of the girls in our group was Argentine and translated when our basic pidgeon Spanish failed us.

After a gentle plod, we were encouraged to have the occasional trot – it’s been many years since I’ve been riding and I found myself clinging to the saddle with my left hand, reins in the right.

“Try to lift up, to stand up when the horse trots”, the neighbouring French girl wisely advised me.

As I relaxed a little, I began to take in the landscape, noticing different types of cactus peppering the gravelled path and thorny bushes.

We paused briefly to take in the mountains, drink water and take pictures. The peacefulness was a welcome contrast to the hum of city life in Mendoza. 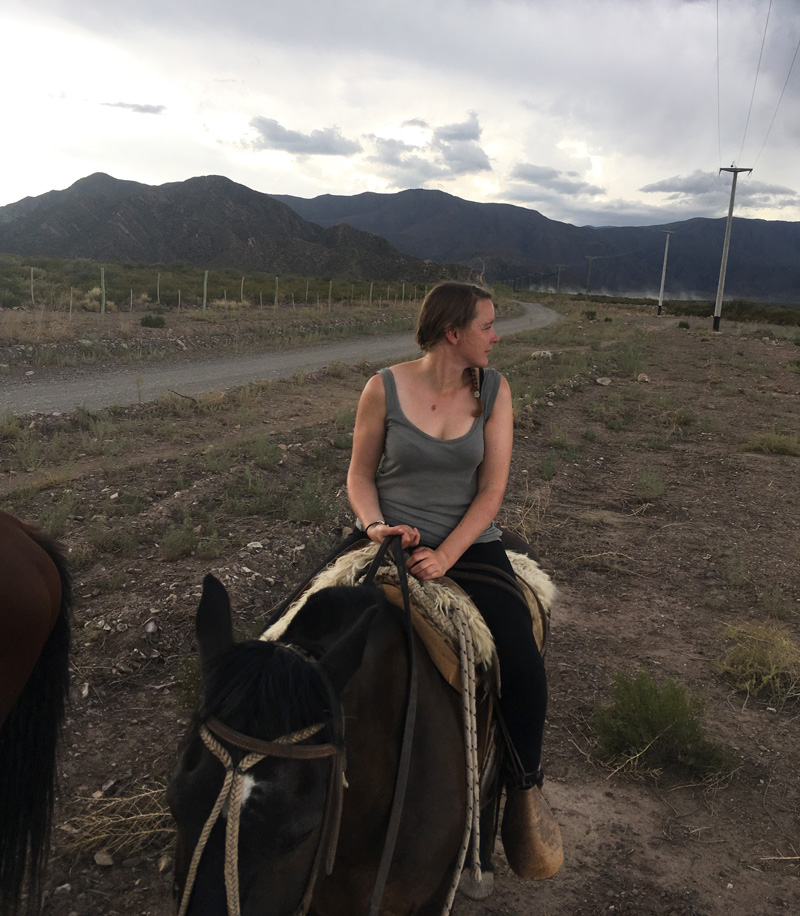 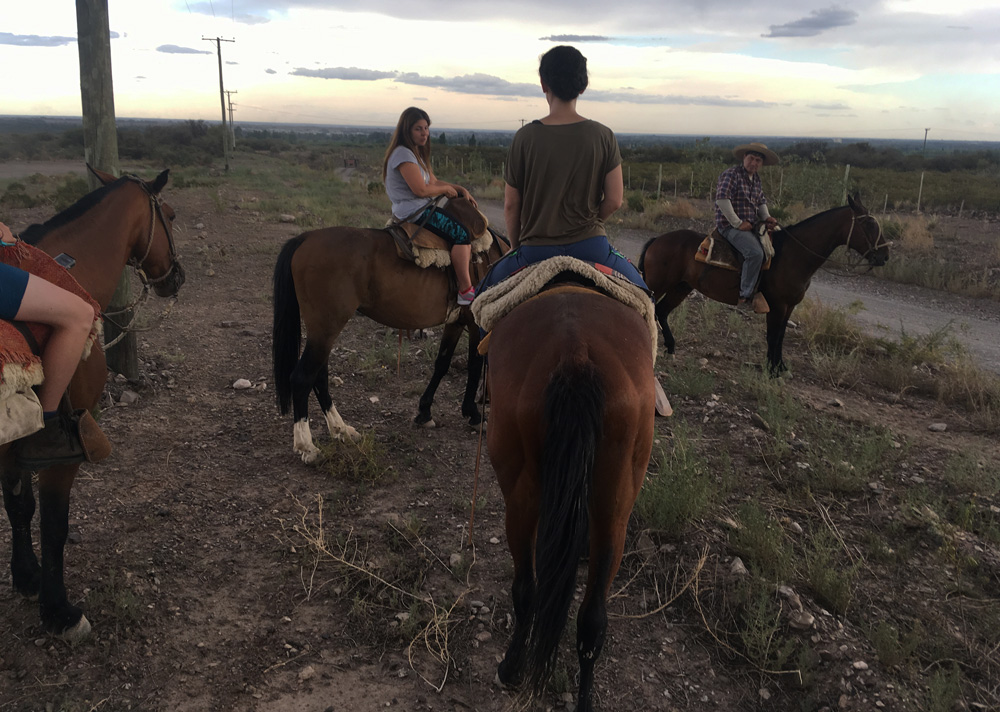 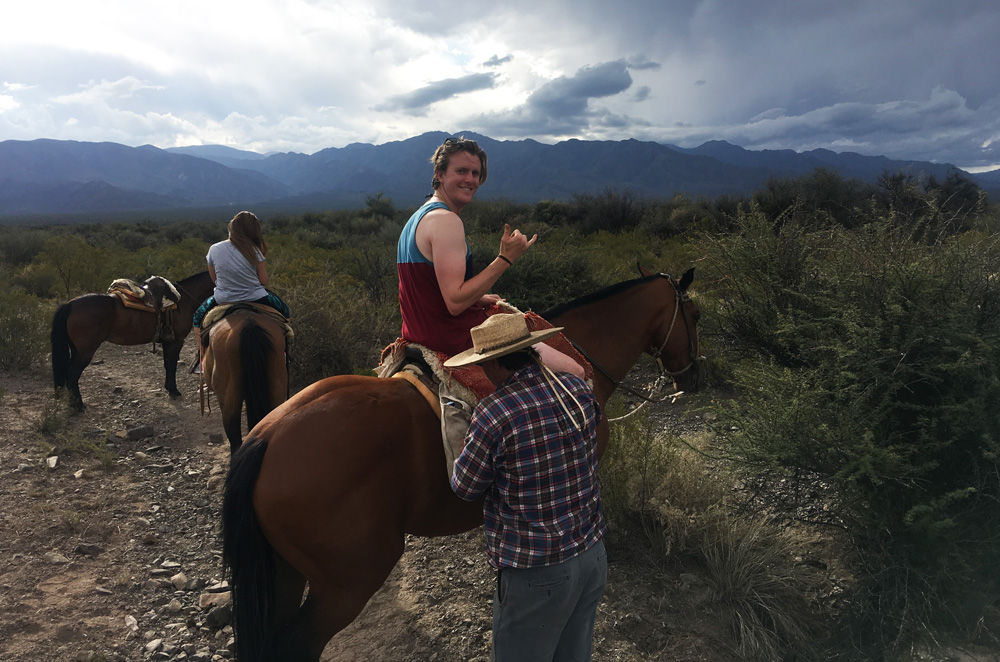 As we turned back towards the ranch, the peace is momentarily shattered first by a trio of quad bikes tearing down the adjacent track followed by the low rumbling of thunder overhead.

Flashes of lightning illuminated the darkening sky, and I’m secretly slightly relieved to see the ranch come into view before the chance a storm.

We found the cob oven roaring with flames, ready for our feast to be cooked.

Thankfully, the rain held off and we soaked our weary feet into the swimming pool, as the family begin to prepare a traditional Argentine asado, salted beef which is then barbecued over a wood fire. A metal tray brimming with potato wedges is also pushed into the flames. 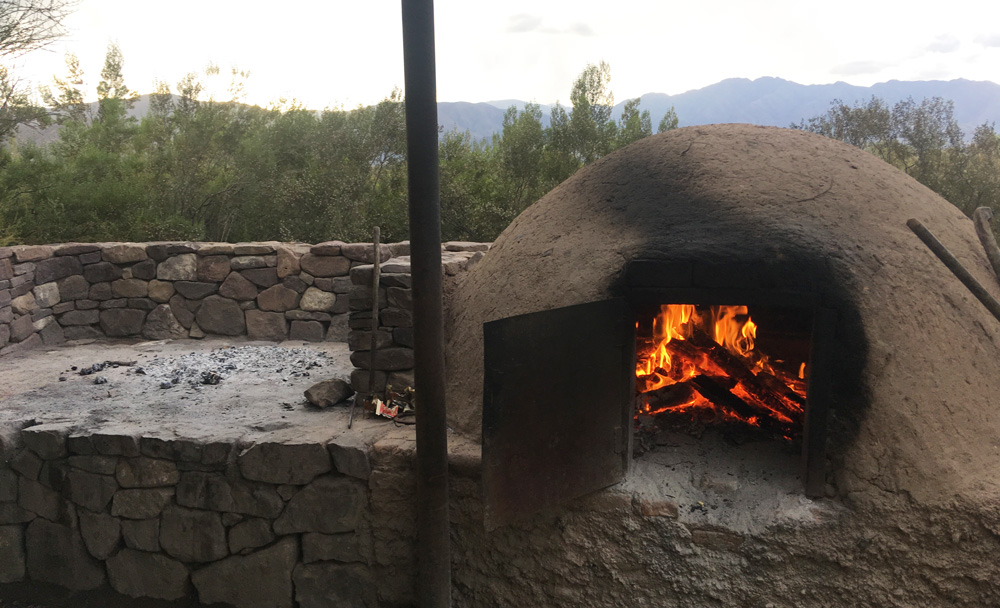 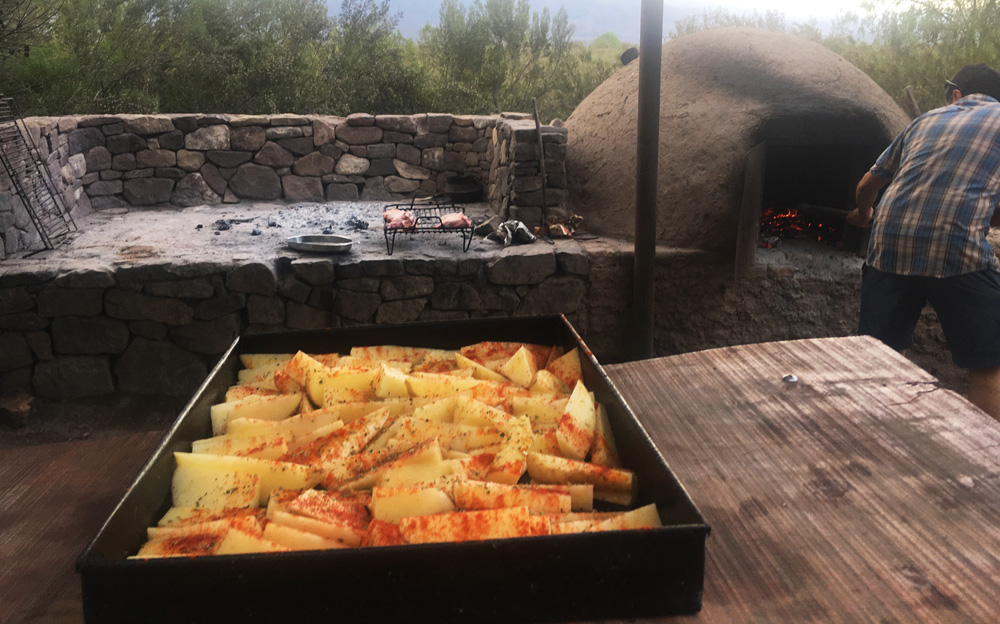 I made my way back to the pool, where the two girls were quietly practising yoga. Birds chatted away as the sun began to dip behind the mountains, creating illuminating streaks of light.

Travel stories and plans are exchanged over tumblers of Argentine Malbec, poured from a large carafe.

After an hour or so, we are called to the table where a simple green salad and crusty bread had been added to accompany the chunky pieces of beef which were being carved up on the table.

Alejandro and the ranch owner joins us for dinner, cradling his 4-week old daughter in his arms.

Conversation flits between Spanish and English, the wine flowing freely now as Alejandro makes a joke of B’s riding style and my insistence on riding Miguel as slowly and as cautiously as possible.

Behind the jokes, his passions for animals is clear- he explains that he has always worked with animals. He didn’t need cars or planes. Just horses. 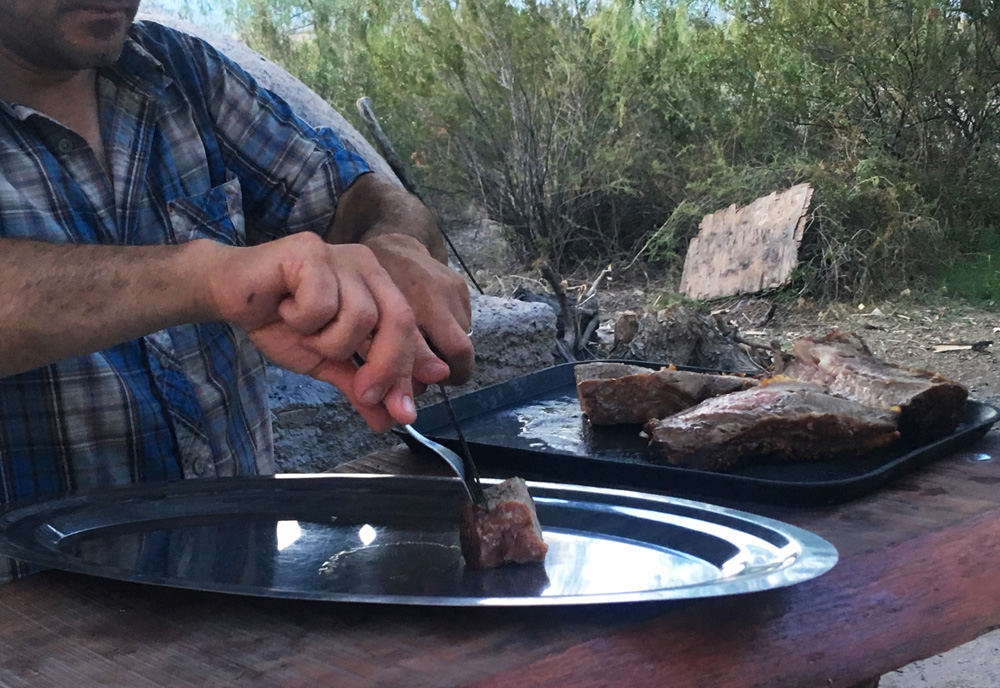 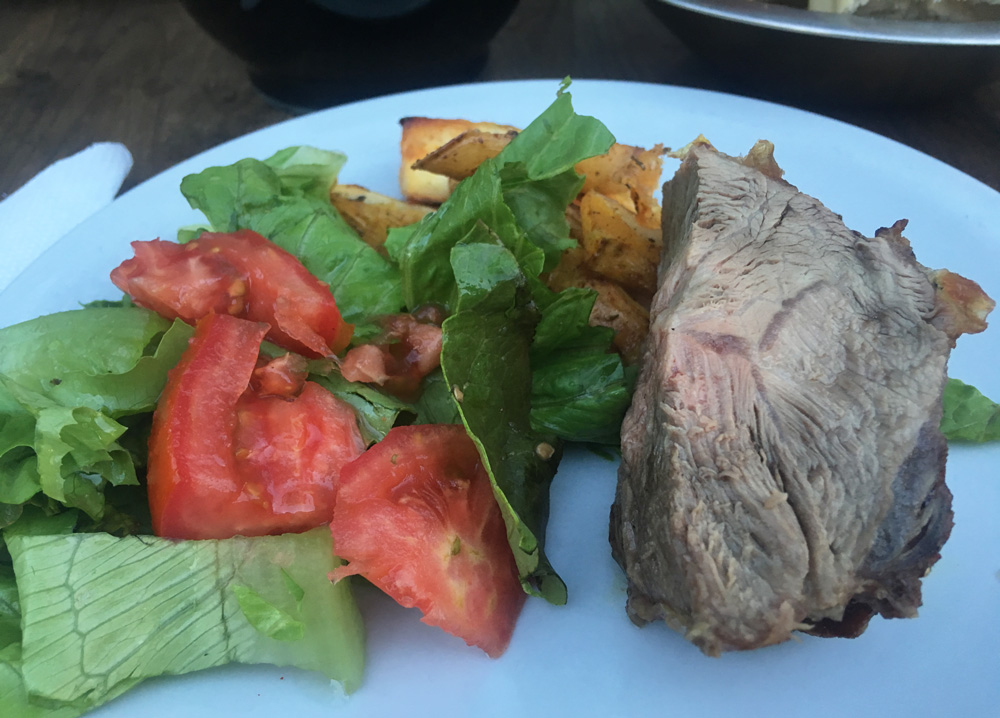 The sky deepened to shades of crimson and orange, and the conversation turns briefly, and awkwardly to the Falklands War. This is the second time it’s happened on the trip, and neither of us really know how to approach the subject, instead, we opt for a gentle diversion tactic. 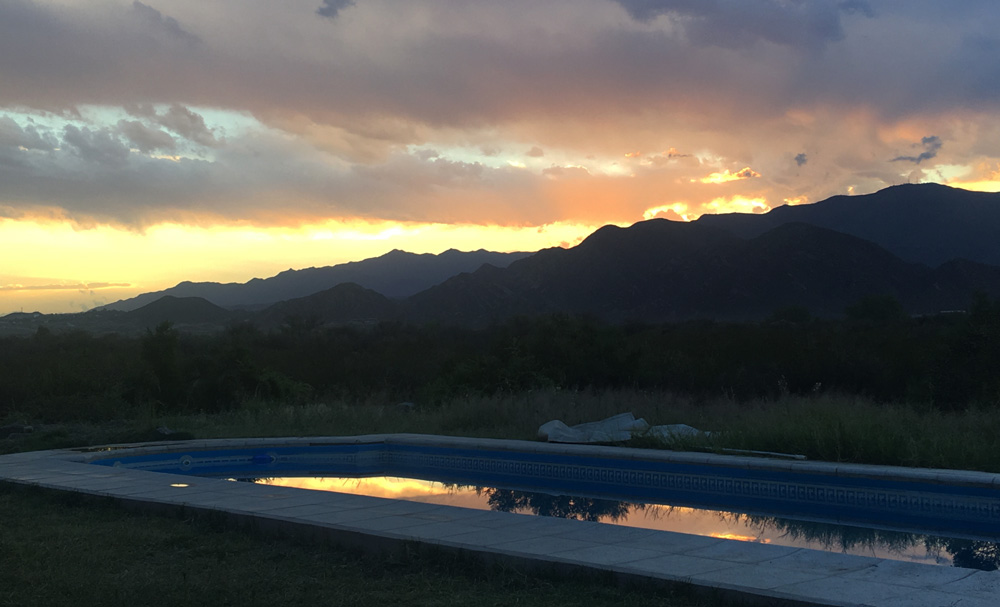 A pair of headlights illuminate the table next to the dying embers of the cob oven, our taxi had arrived.

We bid our farewells with hugs, and it’s back down the bumpy gravel road to the realities of city life. 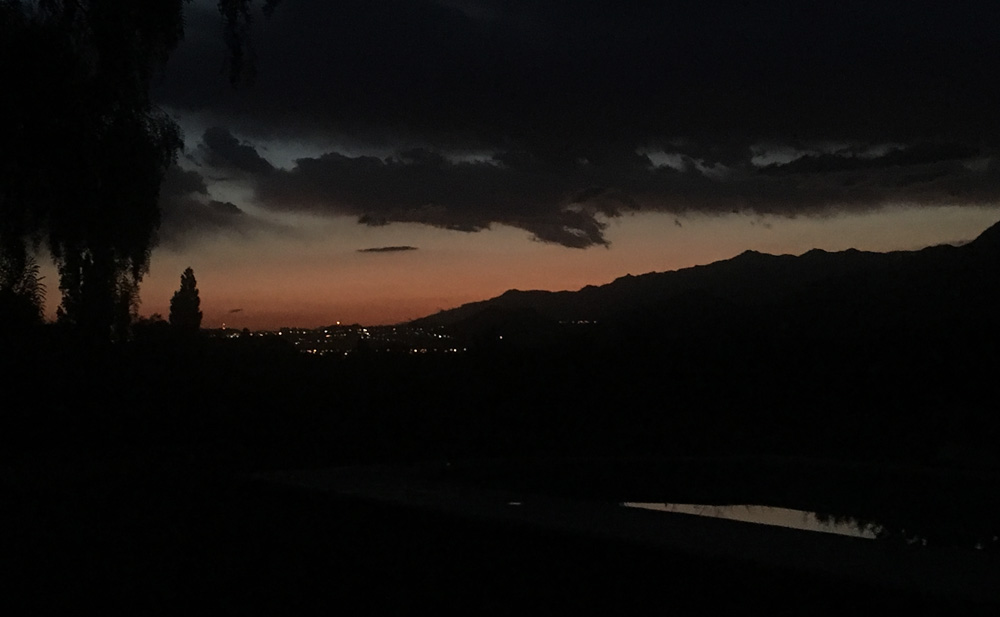 Check out the highlights in this video!

We booked this sunset horse riding trip through the super hostel we stayed at in Mendoza – Hostel Windmill.

This tour agency was also highly recommended (and I used them to book my budget wine tour too).

Catch up on all my posts from Argentina

A Slow Sunday in Buenos Aires 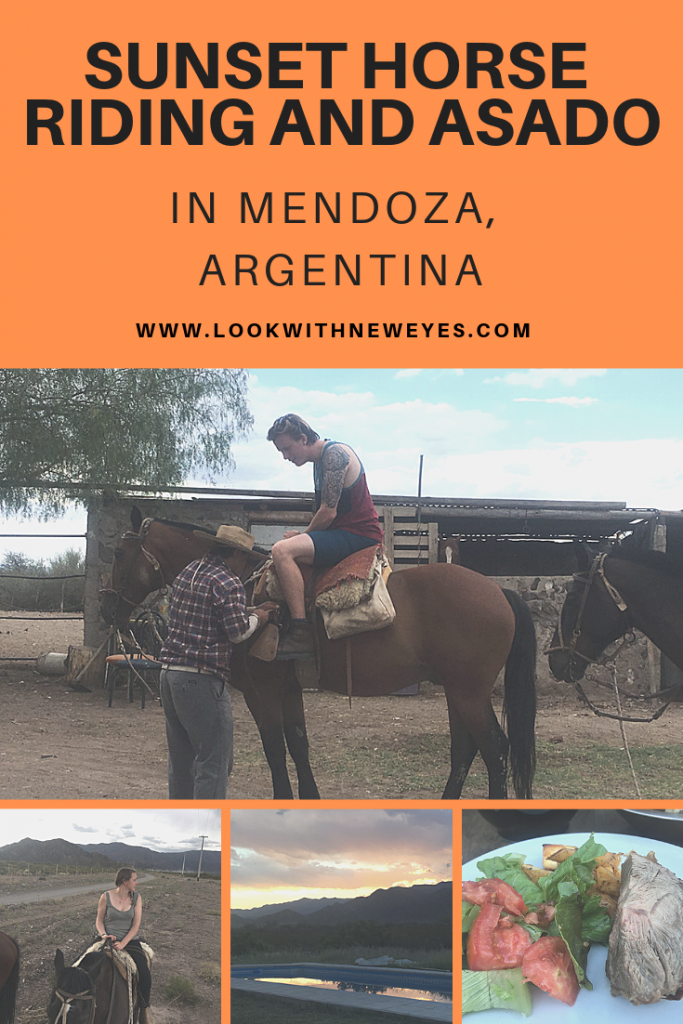 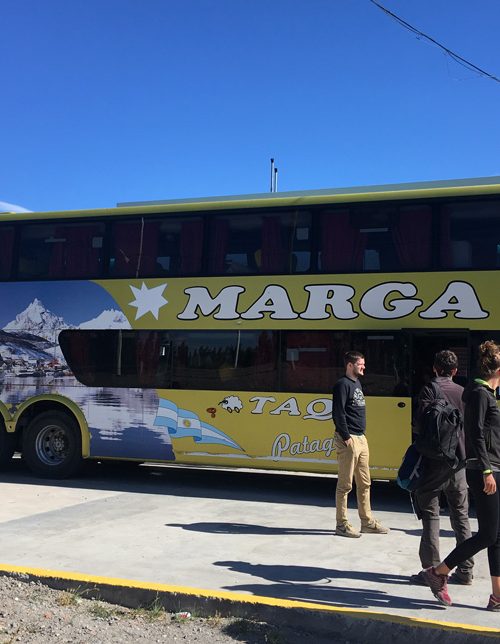 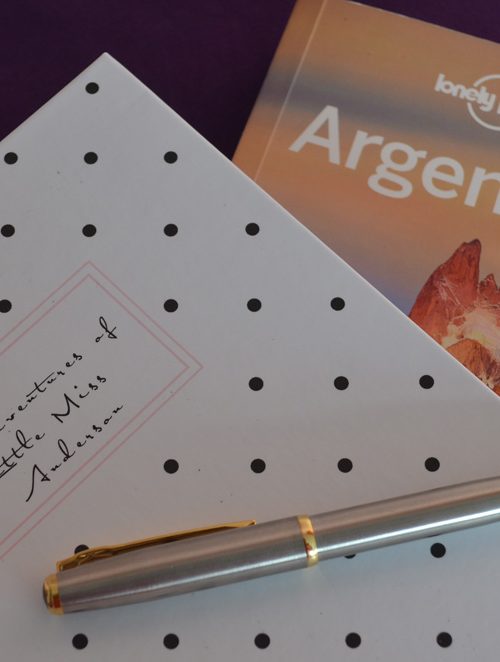 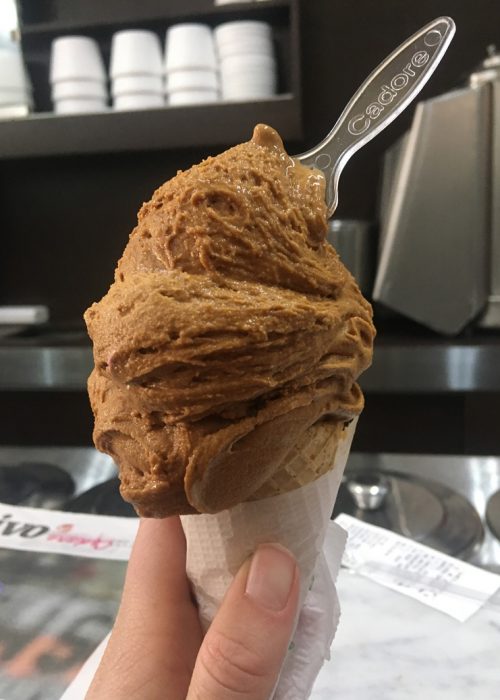