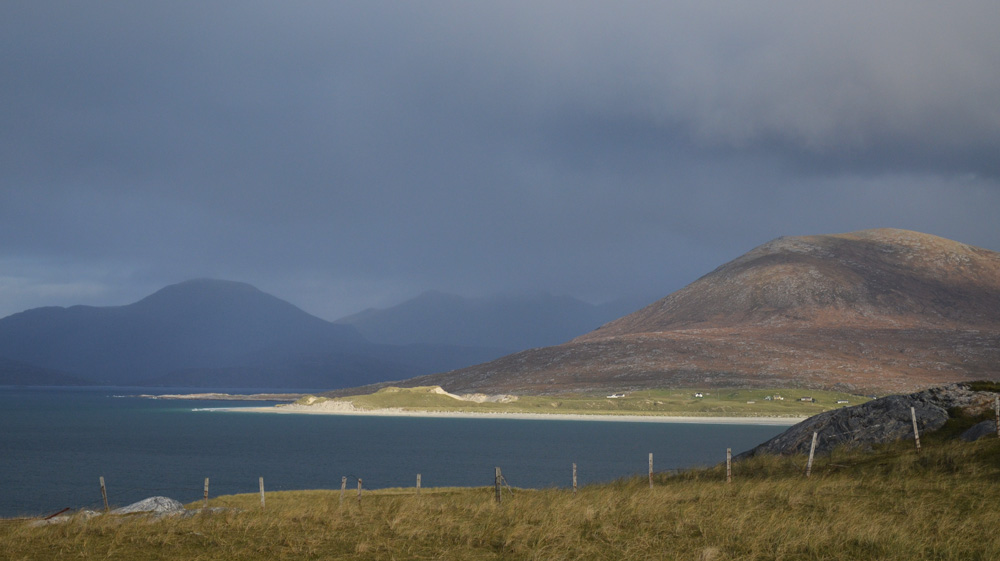 I switched from cleaning bathrooms and dorm rooms this week, to daytime reception shifts to cover staff holidays.

This increased hours during the day meant my workdays were condensed into four and I was given a long weekend. Given the decent looking weather forecast, I immediately set about planning a trip to the Outer Hebrides.

This would be my third visit to the islands. The first, a family holiday to Uist in which I distinctly remember being less than thrilled by bird watching in Lochmaddy and staying in a remote B&B which was battered by a gale all night.

The second was in 2010 after working in a hostel for the summer in Oban, sailing to the Isle of Lewis from Ullapool and using the public minibuses to do a brief tour of the islands and sailing back to the mainland from Barra.

I also managed to leave my passport in a very rural hostel on Lewis just two weeks before I was due to fly to New Zealand – here’s hoping this weeks trip would be more successful!

Sailing from Uig to Tarbet on the Isle of Harris

I ended up running down the hill from the hostel to the pier after losing track of time in the sunshine, crossing my fingers they were still selling passenger tickets (£12.20 for a return) half an hour before the ferry was due to leave.

Thankfully, I was in luck.

I’ve taken a fair few Calmac ferries out to the Scottish Islands, but I still get the butterflies of excitement when setting sail, the anticipation of a new community and place to explore, with each island having its own distinct character.

I sat out on the deck, watching Uig and the bay grow smaller. A couple on deck had an impressive telephoto lens cameras and stood beardy eyed on the lookout for wildlife.

As soon as the ferry docked, I had half an hour before my bus up to Stornoway on the Isle of Lewis, so I made a quick dash to the Isle of Harris Distillery.

A five-minute walk from the pier, the church shaped structure opened in late 2015. The distillery is still waiting for the first barrels of whisky to mature, and instead, are focussing on producing gin infused with local sea kelp. I was searching for a miniature bottle as a gift for a friend, but they only had the beautifully crafted litre bottles, a tad too heavy to carry back to England.

On the bus up to Stornoway (£4.80 one way), the driver had nostalgic tunes from Radio 2 playing, and it made me smile hearing the Friday afternoon traffic reports as we speed along the wide open, empty roads.

Harris is characterised by towering mountains, but once we crossed over Loch Resort to Lewis, the landscape softened to hills, tinged with amber from the dying bracken, giving the island a warm autumn glow.

Stornoway felt huge after living rurally for the past month – roundabouts, traffic lights, a Tesco AND an Argos. I crossed the street from the bus station to a pretty orange house of the Heb Hostel (£18 a night) where I had a peaceful night after a huge plate of haggis, neeps and tatties at the nearby arts centre of An Lanntair.

The morning began with free cereal and toast at the hostel and a chat with Flora from California about living in LA. Leaving the hostel behind, I climbed aboard the half an hour bus ride (£2.70 each way) to the Callanish standing stones on the west coast of Lewis.

I was the only person on the bus, which allowed the driver, James, to give me a guided tour, pointing out the extensive grounds of Lews Castle and the fish farms and factories, the islands biggest industry. In the summer, Callanish is buzzing with tourists from all over the world.

But today, in the October gloom, it was just me and the standing stones.

Mystery surrounds the history of the standing stones which were erected around 5,000 years, some 500 years before Stonehenge. It felt quite the privileged to be able to walk up to and explore the stones alone, a streak of first light casting through the dark clouds.

I had intended to do the full walk around two of the smaller stone circles but the wind was howling by this time, so instead, I took the first bus back to Stornoway.

In need of warming up, I ducked into the Blue Lobster Cafe for a hot chocolate. Newly opened this summer, this place ticks all my dream cafe boxes: proper hot chocolate made in beautiful pottery mugs, random books, a world map for visitors to pin where they are from, a visitor book to leave stories and inspiration, a naughty hazelnut and chocolate tart, tiny pumpkins decorating the windows and an autumn leaf wreath in the large open window overlooking the harbour.

Refuelled, I made my way over to the grounds of Lews Castle to play in the autumn leaves and make my way up to the castle, which had limited access as it was due to hold a wedding in the afternoon. Instead, I went next door to the newly opened Museum Nan Eilean. The interactive exhibition paints a picture of what life in the Outer Hebrides is like and houses the long-term loan of six of the intricately carved Lewis Chessman from the British Museum, discovered in the sand dunes of Uig bay in 1831.

On my way back to the bus, I took a detour to the Charles McCleod butchers which has been making its famous Stornoway black pudding for 70 years and picked up a few slices which I cooked up with eggs from the owner at the hostel back in Tarbet. I spent the night alone in the 33-bed hostel –  the perks of travelling in off season!

The sun peeked through the blinds an hour earlier, the change in clocks signalling a shift towards winter.

I headed out quickly, walking up the steep hill in the direction of South Harris which overlooks the bay in Tarbet. I was hoping to hitch a ride to one of the famous beaches. I was unsure if there would be many cars around as the Outer Hebrides still observes Sunday as a day of rest.

Thankfully, a guy on a fishing trip from Jersey picked me up and we chatted about his evolving engraving business before dropping me near the beach of Traigh Iar.

I sat on the headland for a while, experimenting with my camera and searching for details to capture, unable to believe I was in Scotland. Dark clouds passed in and out, but just before lunchtime, the clouds broke to blue skies.

On the opposite headland, I could see the outline of a single standing stone, and I took a walk up the steep hill which rewarded me with views over to Taransay (where the BBC series of Castaway was filmed in 2000) and the sweeping arch of the neighbouring Luskentyre beach.

I continued on the single track road heading south which hugged the coastline, through the hamlet of Borve and round to the tiny beach of Cowrie where I paused to eat my sandwiches and watch the waves tumble and crash over the rocks.

I continued on to see Scarista beach from a distance, before remembering it would be getting dark earlier and thumbed a ride outside the golf club, scenically positioned right next to the beach.

I was picked up by a couple born and bred on Harris, and they spoke about the rise in tourism this year and I commented how the island would be perfect for a honeymoon (the lady was a hairdresser, and offered her services should I find a suitor in the next few years). They dropped me halfway back to Tarbet on the road to Luskentyre for the end of the golden light hour.

It took about half an hour to get my final ride, with a dozen or so cars passing me by despite the fading light. Eventually, a couple from Liverpool who had moved to the island four years ago to set up a weaving business gave me a ride back to Tarbet, speaking of how natural it felt to escape city life and blend into a new community as we passed through the lunar-like landscape back towards North Harris.

I had company at the hostel that evening, a girl who lived in Alaska and was cycling around Scotland joined me after a ‘date’ with an Italian guy she had met on the ferry from Skye!

The ferry back to Skye left at 7.30am and left me with this parting gift.

I feel a strange sense of belonging in the Hebrides, listening to Nick Mulvey’s song ‘I Don’t Want to Go Home’ as the dockmen untied the ferry.

As the ferry pulled out of Tarbet, rain clouds gathered, leaving a rainbow over Harris and a spectacular fading sunrise as we sailed back towards Skye. 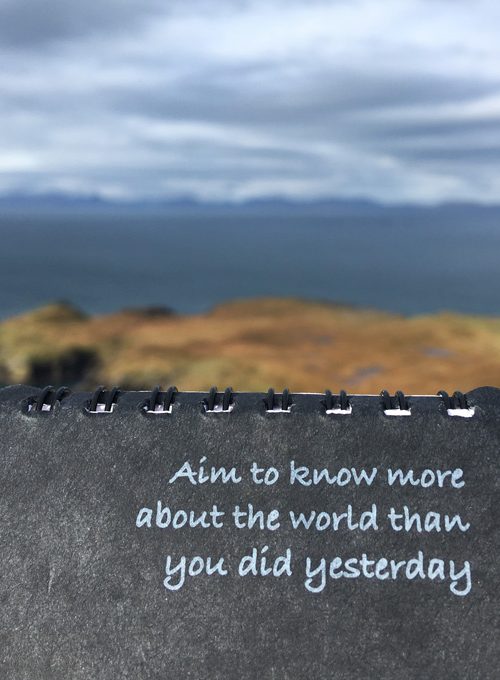 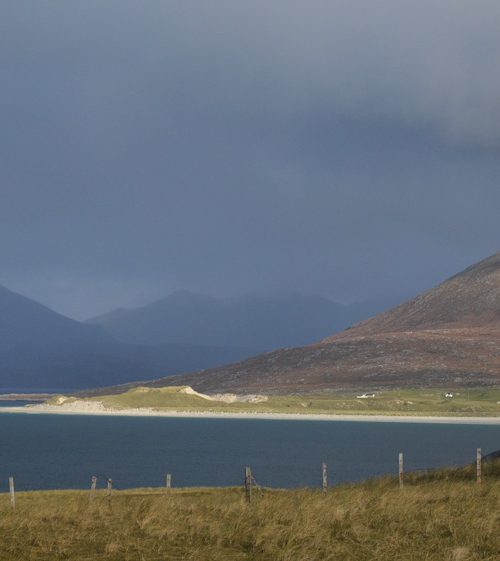 My penultimate wild drip of the year 🎉 Hiking

One of the things I love about living here is retu

Highlights from October in the Lake District ⛰